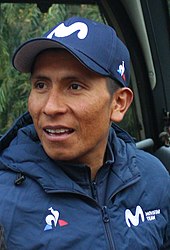 Nicknamed "Nairoman" and "El Cóndor de los Andes", Quintana is a specialist climber, known for his ability to launch sustained and repeated attacks on ascents of steep gradient, high power output and great stamina to react and endure others' attacks. He is also a competent time triallist, making him a consistent contender for general classification at stage races. His best career results are winning the 2014 Giro d'Italia and 2016 Vuelta a España, as well as 2nd place overall in the Tour de France of 2013 and 2015. In addition to his two Grand Tour victories he has also placed in the top 10 on eleven occasions, six of which were on the podium.

His multiple wins in other major stage races, leading to high UCI WorldTour ranking placements at the end of each season, are other reasons why he is seen as one of the most successful stage-racing riders of the recent era, and the best road cyclist in Colombian history.

His brother Dayer Quintana is also a professional cyclist and rode for the Movistar Team with Nairo between 2014 and 2018, and joined him at Arkéa–Samsic in 2020.