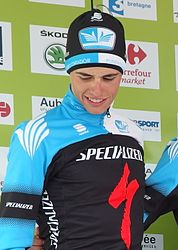 Enric Mas Nicolau (Catalan: [ənˈrik mas nikoˈlaw]) (born 7 January 1995) is a Spanish racing cyclist who currently rides for UCI WorldTeam Movistar Team. He is a talented climber, and has finished in top 10 in prestigious world tour stage races, and has also won a stage at the Tour of the Basque Country. He is regarded as the next Alberto Contador, by the man himself, however Mas stated he would rather be the first Enric Mas. Having previously ridden for the Specialized–Fundación Alberto Contador team, Contador knows the strength of Enric Mas, believing he has a bright future.