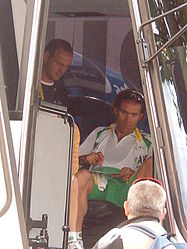 Santiago Botero Echeverry (born October 27, 1972) is a Colombian former professional road bicycle racer. He was a pro from 1996 to 2010, during which time he raced in three editions of the Tour de France and four editions of the Vuelta a España (the Tour of Spain). He was best known for winning the mountains classification in the Tour de France, and the World Championship Time Trial.

He was, for the greater part of his career, a member of the Kelme–Costa Blanca team, but in 2003 joined Team Telekom. His performances as part of the Kelme dissipated in Team Telekom, with the team management blaming his lack of discipline in training, but he claimed health problems. In October 2004 he joined Phonak, together with Miguel Ángel Martín Perdiguero from Saunier Duval–Prodir, and Víctor Hugo Peña and Floyd Landis from U.S. Postal Service. He lives in both Colombia and Madrid, Spain with his wife. Botero joined the American domestic team, Rock Racing, for the 2008 season. Botero finished his professional career riding for the Colombian team Indeportes Antioquia. He was also previously the manager of UCI Continental team Gobernación de Antioquia–Indeportes Antioquia.