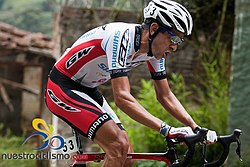 Riding in the 2006-2007 UCI America Tour events, Buenahora won the overall titles of the Clasico Ciclistico Banfoandes and the Vuelta al Táchira, riding for the Gobernación del Zulia - Alcaldía de Cabimas cycling team. In the prior season, he had been disqualified in the Vuelta al Colombia when, whilst leading the race, he had a non-negative doping control. However, Buenahora still managed to finish second overall.