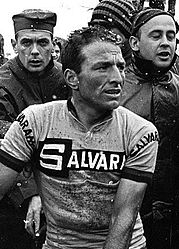 Taccone made his professional debut in 1961. In the same year he won the Giro di Lombardia. During the 1964 Tour de France, he was accused of causing other cyclists to fall, leading to a fight with Spanish racer Fernando Manzaneque and his non-appearance in following tours.

In June 2007, he was arrested and charged with selling counterfeit and stolen clothing.