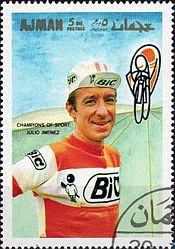 Julio Jiménez Muñoz (born 28 October 1934) is a Spanish former professional road racing cyclist. Known as a climbing specialist, he won the King of the Mountains title six times at Grand Tours. Stage 20 of the 1964 Tour de France was one of the most famous stages in TDF history due to the battle up the Puy de Dome between Anquetil and Poulidor. This stage was won by Jimenez, who was able to cross the line 0:11 ahead of Spanish climber Federico Bahamontes, 0:57 ahead of Poulidor, 1:30 ahead of Vittorio Adorni and 1:39 ahead of Anquetil. In 1965, he became one of (now) four riders to complete the Tour/Vuelta double by winning both Tour's mountains competition in the same year.