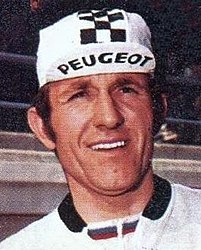 Jean-Pierre Danguillaume (born 25 May 1946) is a retired French professional road bicycle racer. He is the nephew of fellow racing cyclist Camille Danguillaume. His sporting career began with U.C. Joue. As an amateur, he competed competed in the team time trial at the 1968 Summer Olympics and won the 1969 edition of the Peace Race. In 1970 he turned professional with the Peugeot team, where he spent his entire professional career. Between 1970 and 1978, Danguillaume won 7 stages in the Tour de France. His other notable wins included the Grand Prix de Plouay in 1971, the Critérium International in 1973, the Grand Prix du Midi Libre in 1974 and Paris–Bourges in 1975. In the latter year he also took the bronze medal in the road race at the World Championships in Yvoir, Belgium. During his career he took a total of 350 wins, including 68 as a professional. After his retirement at the end of 1978, he became a directeur sportif, managing the Mercier team from 1979 to 1984. After the team was disbanded, he joined Coca-Cola Enterprises as an executive, managing the company's presence at the Tour de France as a sponsor: he remained in this role for 19 years, retiring at the end of 2003. He continued to work at the Tour in a hospitality role.