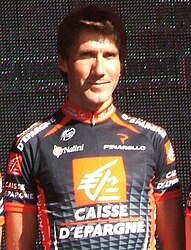 Pablo Lastras García (born 20 January 1976) is a Spanish former racing cyclist, who rode professionally between 1998 and 2015, entirely for the Banesto team and its later iterations. During his career, he recorded stage victories at the three Grand Tours, winning five stages in total.

He now works as a directeur sportif for the team.