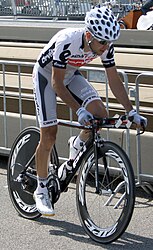 Carlos Sastre Candil (pronounced [ˈkaɾ.los ˈsas.tɾe ˈkandil]; born 22 April 1975) is a former Spanish professional road bicycle racer and winner of the 2008 Tour de France. He consistently achieved outstanding results in the Vuelta a España and in the Tour de France. Sastre established himself as a strong and stable climbing specialist, and after working to improve his individual time trial skills, he became a contender for the top GC spots in the Grand Tours. In total, Sastre finished in the top ten overall of fifteen Grand Tours during his career.

Sastre never tested positive for drugs, nor was he implicated in any doping investigation, even though he performed at the top level of cycling. Sastre continues to be widely regarded, following the Lance Armstrong affair, as one of the very few 'clean' riders to have won the Tour de France in modern times as he has never been involved in a doping affair. In fact, with respect to doping allegations and admissions that have surrounded Tour winners in recent decades, Sastre has been called "Don Limpio" ("Mr. Clean" in Spanish) by the press and others.