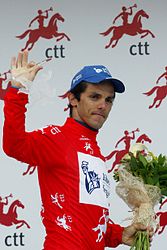 He was the winner of the 2003 Volta a Portugal, and he also placed first in the 2009 edition, however he was later disqualified due to testing positive for CERA in a doping test and was banned for two years.

Upon returning from the ban, Ribeiro joined Efapel–Glassdrive. He remained with the team until the end of the 2013 season, when he joined OFM–Quinta da Lixa.