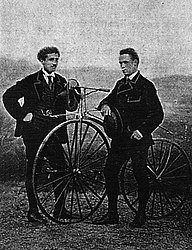 James Moore (14 January 1849 – 17 July 1935) was an English bicycle racer. He is popularly regarded as the winner of the first official cycle race in the world in 1868 at St-Cloud, Paris, although this claim seems to be erroneous. In 1869 he won the world's first road race Paris–Rouen sponsored by Le Vélocipède Illustré and the Olivier brothers' Michaux Bicycle Company. Moore covered the 113 km (70 mi) in 10 hours and 25 minutes. He was one of the first stars of cycle racing, dominating competition for many years.