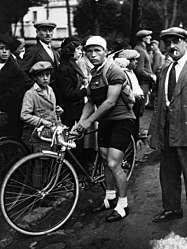 Maurice Archambaud (30 August 1908 in Paris – 3 December 1955 in Le Raincy) was a French professional cyclist from 1932 to 1944. His short stature earned him the nickname of le nabot, or "the dwarf", but his colossal thighs made him an exceptional rider.

He won Paris-Soissons and Paris-Verneuil as an amateur in 1931 and turned professional the following year for Alcyon, one of the top teams in France. He won the inaugural Grand Prix des Nations in his first season.

He set the world hour record at 45.767 km at the Vigorelli velodrome in Milan on 3 November 1937. He beat the Dutchman, Frans Slaats' record of 45.485 km, set on 29 September 1937. The record stood for five years before being beaten by Fausto Coppi.

Archambaud rode for France in the Tour de France between the wars. His sudden changes of form and frequent falls meant that he never won the race, but he did win ten stages and wear the yellow jersey.