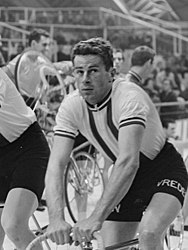 Jacob "Jaap" Oudkerk (born 2 August 1937) is a retired cyclist from the Netherlands. He competed in the 4000 m team pursuit at the 1960 and 1964 Summer Olympics and finished in fifth and third place, respectively.

He was the husband of Marianne Heemskerk, a Dutch Olympic swimmer.