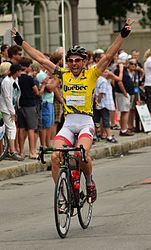 Emile Abraham (born April 28, 1974) is a professional cyclist from Trinidad and Tobago. He won the silver medal in the men's individual road race at the 2007 Pan American Games, just behind Dominican Republic's Wendy Cruz. In 2017 he won the USA Masters National road cycling championships and a bronze medal in the Masters World Track Championships in the points race in Los Angeles.

Some of Emile Abraham's main achievements are

• Tour of Trinidad and Tobago Champion 2013

• More results can be found at: