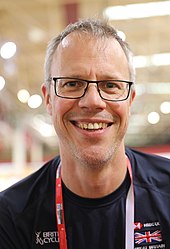 Paul Christian Manning, (born 6 November 1974, Sutton Coldfield) is a former English professional track and road bicycle racer who rode for the UCI Professional Continental team Landbouwkrediet-Tönissteiner in 2007 and 2008. He is strong in the Individual and Team Pursuit disciplines on track and has won many medals for Britain in the Olympics, Commonwealth Games, Track World Championships and Track World Cups.

On 17 August 2008, Manning was a member of the Olympic team pursuit squad which broke the world record in the heats with a time of 3:55:202, beating their Russian opponents comfortably to go through to the final ride-off for silver and gold. The following day, on their way to winning the gold medal, the British Team pursuit broke their own world record in a time of 3:53:314, beating their Danish competitors by 6.7 seconds.

After the Olympics he announced his retirement from professional cycling. Manning was appointed Member of the Order of the British Empire (MBE) in the 2009 New Year Honours.

In 2009, he was inducted into the British Cycling Hall of Fame.

After his retirement Manning joined the GB Cycling Team coaching staff as women's endurance coach; since then the women's endurance team has broken the Team Pursuit world record six times, once in winning the gold medal at the 2012 London Olympics. Manning won the ‘High Performance Coach of the Year Award’ at the 2012 UK Coaching Awards.

He studied Earth Sciences at the University of Birmingham and graduated in 1996.