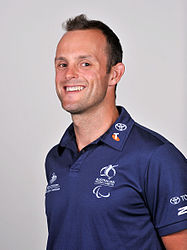 Mark Ian Jamieson (born 4 May 1984, in Dandenong) is an Australian professional racing cyclist. He started competing at the age of 10 in 1994, he first represented his country in the World Junior Track Championships in 2001. He was an Australian Institute of Sport scholarship holder.

He had a successful track career, including a world championship in the team pursuit in 2006, and fourth in the Beijing Olympics as a member of the Australian Team Pursuit Squad

On 15 February 2010 Jamieson appeared before the South Australian District Court on multiple child sex charges and pleaded guilty to four counts of unlawful sexual intercourse with a 15-year-old girl and one count of indecent assault with a girl aged under 16. The charges related to alleged conduct in Adelaide between November 2008 and January 2009. He received a suspended sentence for the offences.

Jamieson received a two-year suspension from cycling as a result of the sentence. The suspension expired on 27 January 2011, and Jamieson returned to competitive cycling at the Melbourne Madison in March of that year. He joined the Jayco 2XU cycling team, and in October competed as part of the team in the Tour of Tasmania, where he posted a strong performance, winning the first day of the six-day event. Later that month he competed in the Grafton to Inverell Cycle Classic, which he won by breaking the previous record time set by Paul Curran.

He changed direction in late 2011, pairing with vision-impaired cyclist Bryce Lindores. After Jamieson relocated to the Gold Coast to train, the two went on to compete at the UCI para-cycling road world cup. Although they did not win, their performance was sufficient to qualify for the paralympics, and in June 2012 it was announced that Jamieson would be piloting for Lindores at the 2012 London Paralympics.