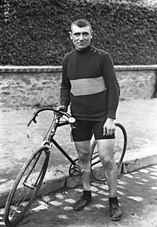 Eugène Christophe (born Malakoff, Paris, France, 22 January 1885, died in Paris, 1 February 1970) was a French road bicycle racer and pioneer of cyclo-cross. He was a professional from 1904 until 1926. In 1919 he became the first rider to wear the yellow jersey of the Tour de France .

Eugène Christophe rode 11 Tours de France and finished eight. He never won but he became famous for having to weld together his bicycle while leading. It was one of a series of events that coloured his racing career.