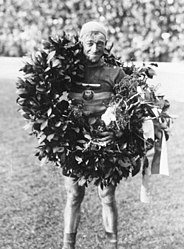 Erik Viktor "Orsa" Bohlin (1 June 1897 – 8 June 1977) was a Swedish road racing cyclist who competed in the 1924 Summer Olympics. He finished seventh in the individual road race and won a team bronze medal.

During his cycling career Bohlin won four national titles and two Swedish six-day races (in 1924 and 1926). He retired in 1927 after finishing fourth at the road world championships. He later changed to motorcycling, and together with engineer Gösta Rödén created a 250 cc that set a new Swedish speed record.