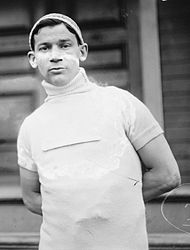 Maurice Brocco (28 January 1883, in Fismes – 26 June 1965, in Erigné) was a French professional road bicycle racer between 1906 and 1927. He was born into a family of Swiss-Italian immigrants. In 1911 he won a stage in the Tour de France. He participated six times in the Tour de France, but finished the race only once. In his later career he was successful in six-day races.

In the 1911 Tour de France, Brocco did not finish the ninth stage. Brocco then profited from a rule that allowed riders who did not finish a stage to continue racing, without competing for the general classification. The next stage was won by Brocco. Brocco was the only cyclist to profit from that rule, as it was abolished afterwards. He would eventually be disqualified from the race.