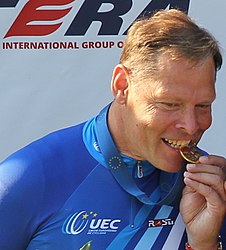 Michel Vaarten (born 17 January 1957) is a retired track cyclist and road bicycle racer from Belgium. He represented Belgium at the 1976 Summer Olympics in Montreal, Quebec, Canada, where he won silver medal in the 1.000m time trial behind East Germany's Klaus-Jürgen Grünke. Vaarten was a professional from 1979 to 1992. He won 12 national titles, one European title and one world title, mainly in track cycling. Vaarten is currently piloting a Derny bike in many Six Day Cycling events around Europe.

After his competitive career, he served as a pacemaker.