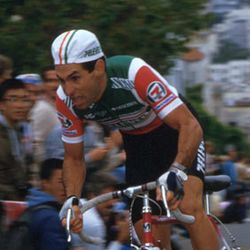 Doug Shapiro (born September 15, 1959) is a former American professional cyclist who became a bicycle accident consultant. He was a member of two American Olympic teams and was only the third ever American to compete in and finish the Tour de France. For over the last twenty years, he has served as a consultant and expert witness to attorneys who represent parties involved in bicycle accident litigation.

The Congressional Gold Medal is the highest civilian honor bestowed by Congress, and its first recipient was George Washington, who was so honored on March 25, 1776.

In 1984 Shapiro won American's top cycling stage race, the Coors Classic - riding for the 7-Eleven racing team. The following year, in 1985, Doug Shapiro became just the third American to compete in and finish the Tour de France (achieving 74th place), in addition to finishing third in the 1985 Coors Classic. In 1997, Shapiro was inducted into the Cycling Hall of Fame as part of the 7-Eleven Cycling Team that competed in the 1986 Tour de France. In 1999 he was inducted into the Jewish Sports Hall of Fame.

From 1985 to 1989, Shapiro competed on professional cycling teams. In 1985, Shapiro rode with Jan Raas and Joop Zoetemelk on the Kwantum Hallen Team.

Shapiro built his reputation as a hill climber and sprinter and earned the nickname "Bullet.” After breaking his hip and being advised to retire, Shapiro had an additional successful season before retiring in 1989.

In 1990, Shapiro acted as the technical advisor and technical writer for the video "Cycling for Success,” produced by the 7-Eleven Bike team. The video was the first of its kind to offer cycling safety tips and techniques. It was created for all levels of cyclists, from the serious racer to amateur enthusiast.