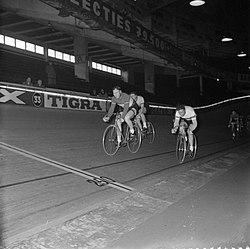 Gillen followed in the footsteps of his father, Maurice Gillen, who worked as a train driver but also competed as a cyclist at the 1924 Summer Olympics. Although he competed on the road, his most significant successes were on the track: in the World Championship individual pursuit, which he competed in 19 times, he took the silver medal in 1949 behind Fausto Coppi, and took two bronze medals in 1952 and 1954. In 1955 Gillen also set a new world record for the 5 km individual pursuit at the opening of the Palazzo dello Sport in Milan, where he took two seconds off the old record held by Rolf Graf, recording a time of 6:19.2. He also competed in 143 six-day races, making his debut in 1948 at the Six Days of New York, where he and team-mate Mett Clemens finished second. He took a total of 11 six-day wins between 1953 and 1964. He retired from international competition in April 1966. After his cycling career, he worked in banking. He also served as President of Panathlon Luxembourg.