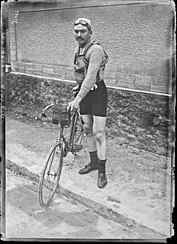 In 1922, Heusghem took over the yellow jersey with just three stages to go but on the next day fell foul of the rules. Having broken his frame, he swapped bicycles without permission and received a one-hour penalty that relegated him to fourth and handing the tour to Firmin Lambot.