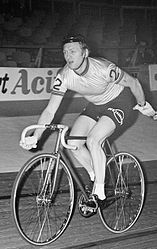 On track, he won several medals at European championships, mostly in the madison event. On the road, he competed in 228 six-day races and won 37 of them, nearly all in his native Germany, which places him as one of the ten most successful racers. He completed his last six-day race in 1978 in Milan, aged 43. His racing partners included Eddy Merckx, Patrick Sercu, Rolf Wolfshohl, Rudi Altig, Dieter Kemper and Rik Van Steenbergen.