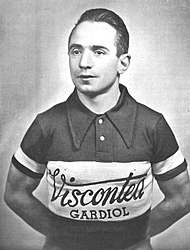 Giorgetti was born in Bovisio-Masciago. He won a gold medal in the team pursuit at the 1920 Summer Olympics in Antwerp (with Arnaldo Carli, Ruggero Ferrario and Primo Magnani). Giorgetti also specialized in six-day racing. He won the prestigious Six Days of New York a record eight times, the first time in 1926 with Reggie McNamara. He died in Varese, aged 80.