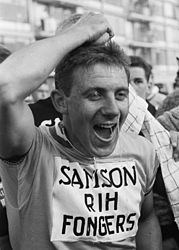 Hendrik Jan Willem "Henk" Cornelisse (born 16 October 1940) is a retired Dutch cyclist. His sporting career began with Olympia Amsterdam. He won a bronze medal in the 4 km team pursuit along with Cor Schuuring, Gerard Koel and Jaap Oudkerk at the 1964 Summer Olympics. He also won the Ronde van Noord-Holland and Ronde van Overijssel in 1962 and one stage of the Olympia's Tour in 1964.