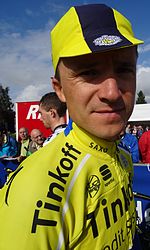 Evgeni Petrov (born 25 May 1978 in Ufa) is a Russian former professional road bicycle racer, who rode professionally between 2001 and 2016 for the Mapei–Quick-Step, iBanesto.com, Saeco Macchine per Caffè, Lampre–Fondital, Tinkoff Credit Systems, Team Katusha, Astana and Tinkoff teams. He won the 11th stage of the 2010 Giro d'Italia from Lucera to L'Aquila. He was ejected from the 2005 Tour de France and suspended from cycling for two weeks after his haemetocrit was deemed over the limit by morning controls on the tenth stage.