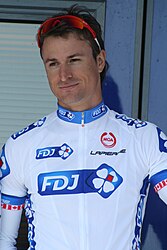 Born in Boucherville, Quebec, Rollin began his professional career in 2001 with the team Sympatico High Speed-Jet Fuel Coffee and again the following year, 2002 with Sympatico Edition Haute Vitese. He then spent three years in France racing as an elite amateur under director-sportif Guy Gallopin for the Roubaix team. After having issues with the way he was treated during Roubaix's transition to a professional team, he returned to North America to ride for the Kodakgallery.com - Sierra Nevada Brewing Co. team.

For 2008 Rollin joined the Toyota-United team, with whom he won the Rochester Omnium and the fourth stage of the Tour of California. He won the stage with a nearly seven-hour breakaway in a driving rainstorm, just holding off his fellow breakaway companions after attacking near the finish. Thanks to that performance, he grabbed the lead in the sprints classification and would defend the jersey successfully for the remainder of the race.

In 2009 he got his chance to join a major European professional team in the Swiss-based, Canadian-sponsored Cervélo TestTeam, with his best result of the year coming at the Scheldeprijs semi-classic where he reached the podium with a third place. In October 2010, he signed for two years with the ProTour team FDJ.

He was disqualified from the 2012 Giro d'Italia on the 20th stage for holding on to cars while he was unable to keep the pace.

Rollin initially retired from racing at the end of 2013 after being unable to secure a contract for the 2014 season. However, in August 2014 Cofidis announced that they had signed Rollin alongside his former FDJ teammates Nacer Bouhanni and Geoffrey Soupe for 2015.