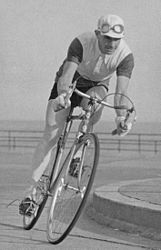 Sir Hubert Ferdinand Opperman, OBE (29 May 1904 – 18 April 1996), referred to as Oppy by Australian and French crowds, was an Australian cyclist and politician, whose endurance cycling feats in the 1920s and 1930s earned him international acclaim.

Hubert rode a bicycle from the age of eight until his 90th birthday, when his wife Mavys, fearing for his health and safety, forced him to stop. His stamina and endurance in cycling earned Opperman the status of one of the greatest Australian sportsmen.