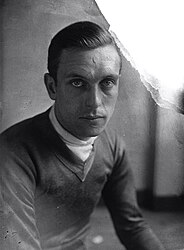 Jean Aerts (8 September 1907 – 15 June 1992) was a Belgian road bicycle racer who specialized as a sprinter. Aerts became the first man to win both the world amateur (1927) and professional (1935) road race championships. In 1935, Aerts captured first place and the gold medal at the professional UCI Road World Championships in Floreffe, Belgium.

In 1927 professional and amateur riders rode concurrently at the Nürburgring in Germany and Aerts finished 5th, the highest ranked amateur. He also competed in three events at the 1928 Summer Olympics.

Although he lacked climbing ability for major tours, he used his sprinting ability to win 11 stages of the Tour de France, including six in 1933.