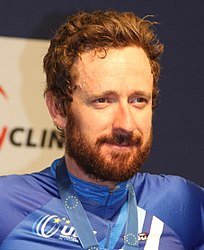 Sir Bradley Marc Wiggins, CBE (born 28 April 1980) is a British former professional road and track racing cyclist, who competed professionally between 2001 and 2016. He began his cycling career on the track, but later made the transition to road cycling. He won world titles in four disciplines (Madison, individual pursuit, team pursuit and road time trial), and Olympic gold in three (individual pursuit, team pursuit and road time trial). He is the only rider to have won both World and Olympic championships on both the track and the road as well as winning the Tour de France. He has worn the leader's jersey in each of the three Grand Tours of cycling and held the world record in team pursuit on multiple occasions. He won a gold medal at four successive Olympic Games from 2004 to 2016, and held the record as Great Britain's most decorated Olympian with 8 medals until Jason Kenny won his 9th in 2021. He is the only rider to win both the Tour de France and Olympic Gold in the same year, winning them a week apart in 2012. During his career and afterwards he faced a series of allegations that he exploited a loophole in cycling’s anti-doping regulations to use a performance-enhancing drug, but he did not receive any bans or suspensions in relation to doping during his career.

The son of the Australian cyclist Gary Wiggins, Wiggins was born to a British mother in Ghent, Belgium, and raised in London from the age of two. He competed on the track from the early part of his career until 2008. Between 2000 and 2008 he won ten medals at the track world championships, of which six were gold: three in the individual pursuit, two in the team pursuit and one in the madison. His first Olympic medal was a bronze in the team pursuit in Sydney 2000, before winning three medals including the gold in the individual pursuit at the Athens 2004, and two golds in the individual and team pursuit at the Beijing 2008.

On the road, Wiggins turned professional in 2001 but made it his focus from 2008. Initially viewed as a time trial specialist and as a rouleur, he showed his ability in stage races when he came fourth in the 2009 Tour de France; he was later promoted to third after Lance Armstrong's results were annulled in 2012. He signed with the newly formed Team Sky in 2010, and in 2011 he claimed his first victory in a major stage race in the Critérium du Dauphiné, as well as finishing third, later promoted to second, in the Vuelta a España. In 2012, Wiggins won the Paris–Nice, the Tour de Romandie, the Critérium du Dauphiné, and became the first British cyclist to win the Tour de France and the time trial at the 2012 Summer Olympics. In 2014, he won gold in the time trial at the road world championships, and founded the WIGGINS cycling team. Wiggins returned to the track at the 2014 Commonwealth Games, and in June 2015 he set a new hour record with a distance of 54.526 km (33.881 mi). In 2016, he won a further world championship in the madison, and gold in the team pursuit at the Olympics, his fifth successive medal winning appearance at the Games. He retired from all forms of professional cycling on 28 December 2016.

Wiggins was awarded a CBE in 2009. Following his success in 2012, Wiggins was the subject of further honours and awards: the Vélo d'Or award for best rider of the year, the BBC Sports Personality of the Year Award and a knighthood as part of the 2013 New Year Honours.

On 5 March 2018, the British House of Commons Committee for Digital, Culture, Media and Sport published their report called "Combatting doping in sport". They concluded inter alia that Team Sky had used the powerful banned corticosteroid triamcinolone in 2012 under TUE (Therapeutic Use Exemption) "to prepare Bradley Wiggins, and possibly other riders supporting him, for the Tour de France. The purpose of this was not to treat medical need, but to improve his power to weight ratio ahead of the race." The report concluded that "we believe that drugs were being used by Team Sky, within the World Anti-Doping Agency rules, to enhance the performance of riders, and not just to treat medical need."