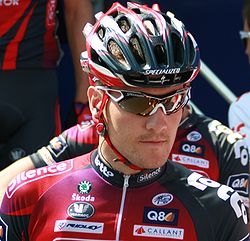 Roy Sentjens (born 15 December 1980 in Neerpelt) is a retired Belgian road bicycle racer, who competed as a professional between 2002 and 2013. Sentjens has also previously competed for UCI ProTour team Team Milram. The highlight of his career was victory in the Belgian semi-classic Kuurne–Brussels–Kuurne in 2003. Sentjens started his career with Rabobank in 2002, and transferred to Predictor-Lotto for the 2007 season. Sentjens held dual citizenship, from both Belgium and the Netherlands, and from 2002 until 2004 raced under a Dutch licence. However, in 2005, he changed to a Belgian licence as he felt more Belgian than Dutch.