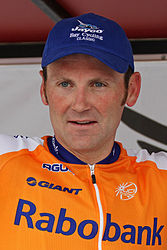 A former Australian Institute of Sport scholarship holder, Brown's greatest success as a road cyclist came in the Tour de Langkawi in Malaysia, including a record-breaking 5 stage wins in 2005 and winning the Points Classification in 2003 and 2005.

As a track cyclist he won a gold medal at the 2004 Summer Olympics in Athens as a member of the team pursuit (with Bradley McGee, Brett Lancaster, and Luke Roberts) in world record-breaking time of 3:58.233. He also won a gold medal with Stuart O'Grady for the Madison event at the 2004 Summer Olympics. At the 2002 Commonwealth Games in Manchester he won two gold medals: for the Team pursuit, and the Scratch Race.