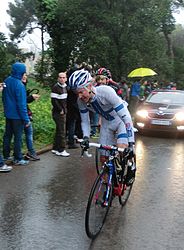 Jussi Veikkanen (born 29 March 1981) is a retired Finnish road racing cyclist, who rode as a professional between 2005 and 2015 for the Omega Pharma–Lotto and FDJ teams. Born in Riihimäki, Veikkanen started his career with team Mälarenergi and he became a professional cyclist in 2005 with Française des Jeux. He won the Finnish National Road Race Championships seven times between 2003 and 2014.

After a long breakaway on stage 2 of the 2009 Tour de France he donned the Polka Dot Jersey for king of the mountains. He kept the jersey until stage 6, when Stéphane Augé took it.

He signed with Omega Pharma–Lotto for the 2011 season, but rejoined FDJ–BigMat for the 2012 season.

Veikkanen announced ahead of the 2015 edition of the Tour de Vendée that the race would be his last as a professional, and that he would remain with FDJ as a member of staff after retiring from the road.