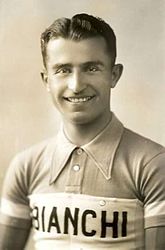 As with many Italian bicycle racers, after his retirement in the late 1930s he began building bicycles, and founded Olmo (also known as Olmo Biciclette). The Olmo Biciclette manufacturing center was set up in his home town of Celle Ligure Italy in 1938, where the company continues to manufacture their bicycles today.

Later in his life, Giuseppe (Often called "Gepin" for short) came to be known as a successful entrepreneur and between the 1940s and 1970s he expanded his company into several manufacturing industries. These individual businesses are all managed under the Olmo Group today. Olmo la Biciclissima or Giuseppe Olmo spa, as the bicycle manufacture goes by today. They produced some very high quality bicycles often comparative quality to the great Colnago. Today they produce many high quality race bicycles, as well as mountain and city bicycles of ranging quality.