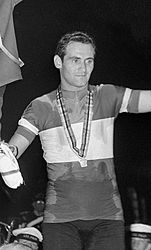 He was born to Pasquale and Emma De Lillo in Milan. His father was a fan of cycling and took his son to velodroms from the infant age. He started training at the age of 15 but could not ride behind motorcycles because Italian regulations allowed to do so only from age 18. Between 1959 and 1971 De Lillo was the best motor-paced racer in Italy and a strong contender internationally. After retirement in 1976 he stayed with cycling, first as a pacer and then as a functionary. From 1986 to 1989, he managed the Bianchi cycling team, and since 1994 he is a member of the technical committee of the Italian Federation of Professional Cycling.

He is married to Rosalba. For more than 40 years they run a small shop selling tobacco, coffee and Swiss chocolate, watches and knives.