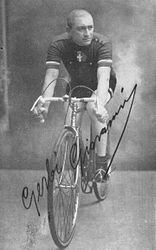 He was nicknamed the "red devil", due to his red jersey and his "never-say-die" attitude.