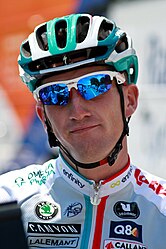 Jurgen Van den Broeck (born 1 February 1983) is a Belgian former road bicycle racer, who competed professionally between 2004 and 2017 for the Discovery Channel, Lotto–Soudal, Team Katusha and LottoNL–Jumbo squads. Van den Broeck specialised in the time trial discipline, having been Junior World Champion against the clock in 2001. The promise he first displayed in minor stage races like the Tour de Romandie and Eneco Tour was later validated and confirmed by top-10 finishes in all three Grand Tours: the Giro d'Italia, the Tour de France and the Vuelta a España.