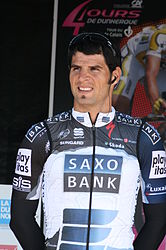 Juan José Haedo (born 26 January 1981) is an Argentine former professional road racing cyclist and track cyclist, who rode professionally between 2003 and 2014. He is the brother of Lucas Sebastián Haedo.

Haedo started his career on the track before turning professional on the road in 2003 with Colavita-Bolla. After a year in the United Stages with the Toyota - United Pro Cycling Team he joined Team CSC in 2007. Haedo had a successful career with CSC picking up notable stage wins in the Tour of California, Critérium du Dauphiné, Tirreno Adriatico and Vuelta a España. In 2010 he was granted the Konex Award Merit Diploma as one of the five best cyclist of the last decade in Argentina. He competed with the team until the end of 2012, when he joined Jamis–Hagens Berman. After retiring he stayed with the team as an assistant director.