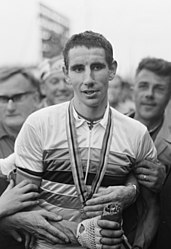 Graham Paul Webb (13 January 1944 – 28 May 2017) was an English racing cyclist who became the world amateur road race champion in 1967. In response to a journalist's shouted comment that the last British amateur world road champion had been Dave Marsh 45 years earlier, Webb retorted: "And they'll have to wait another 45 years before another British rider wins." Not only did no British man win a world road race championship in the following 45 years, but none can now win the amateur championship as the segregation between amateur and professional cycling no longer exists.