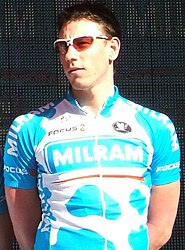 Markus Eichler (born 18 February 1982 in Varel) is a German professional road bicycle racer, currently under contract to the German Team Stölting. He had originally signed for 2011 with the Australian team called Pegasus, but that team failed to secure a UCI license of any kind, leaving its riders to need to sign elsewhere.

Eichler left NetApp–Endura at the end of the 2013 season, and joined Team Stölting for the 2014 season.