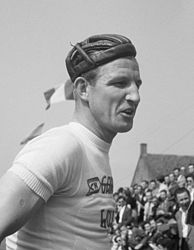 Gerrit Schulte (7 January 1916 – 26 February 1992) was a Dutch professional track bicycle racer. Between 1940 and 1960 he won 19 six-day races out of 73 starts and was one of the dominant Six days racers of his time. Schulte was as well successful in track pursuit, becoming national champion ten times, European champion twice and world champion once, in 1948, when he beat Fausto Coppi in the final. He was also successful as a road race cyclists, becoming national champion three times and winning a stage in the 1938 Tour de France. Since 1955, the Gerrit Schulte Trophy has been awarded by the national federation to the best professional rider in the Netherlands.