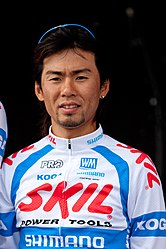 Yukihiro Doi (土井 雪広, Doi Yukihiro, born 18 September 1983, in Yamagata Prefecture) is a Japanese professional racing cyclist, currently riding for Matrix Powertag. After graduating from Hosei University, he joined the Shimano Racing team in 2004. Since then, he has mostly raced abroad, finishing second in the Tour of Siam (2007), eighth in the Tour de Langkawi (2007), fifth in the Tour de Hokkaido (2007), and sixth in the Tour of Turkey (2010). In 2011, he became the first Japanese to compete in the Vuelta a España, finishing in 150th place. In 2012, he won the Japanese National Road Race Championships. In November 2012, it was announced that in 2013 he would be riding for Team Ukyo, a cycling team run by the racing driver Ukyo Katayama.