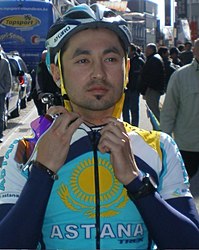 Bazayev retired at the end of the 2013 season, after ten years as a professional.