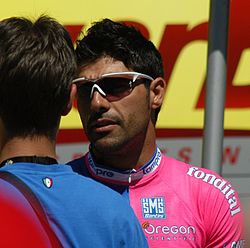 Danilo Napolitano (born 31 January 1981) is an Italian former professional road racing cyclist, who rode professionally between 2004 and 2017, and was chiefly known for his sprinting abilities.

Born in Vittoria, Sicily, Napolitano turned professional in 2004 and for the 2004 and 2005 seasons he rode for the professional continental team LPR–Piacenza. For the 2006 season he moved on to the UCI ProTour squad Lampre–Fondital where his most important victories were two stage wins in the Tour of Austria, and a stage win in the Tour Méditerranéen. He joined Team Katusha at the beginning of the 2009 season.