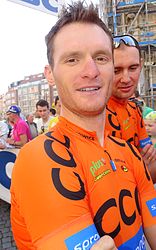 Grega Bole (born 13 August 1985 in Jesenice, Yugoslavia) is a Slovenian professional road bicycle racer, who most recently rode for UCI WorldTeam Bahrain–McLaren. His biggest victory is the 2011 GP Ouest–France, where he launched a solo attack with 2 kilometres (1.2 mi) to go. He held on as the field was closing in rapidly, with only Simon Gerrans who was second on the day being awarded the same time as Bole. In 2015, Bole was the victor of the first stage of the inaugural Tour of Croatia after negotiating a series of bends where two crashes occurred.