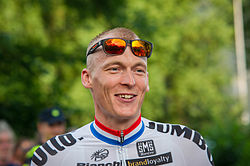 Robert Gesink (born 31 May 1986) is a Dutch professional cyclist, who currently rides for UCI WorldTeam Team Jumbo–Visma. His major victories include the 2012 Tour of California, the 2011 Tour of Oman and the 2010 Grand Prix Cycliste de Montréal. Gesink also won the Giro dell'Emilia twice and offered some good performances on Grand Tours and one-week stage races, thanks in part to his climbing and time trialing abilities.