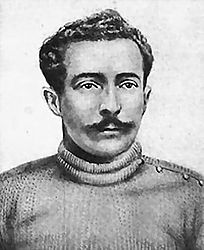 He was considered the finest climber of the Tour. In the 1905 race he was first up the Ballon d'Alsace but lost the lead to Hippolyte Aucouturier after nails punctured his final spare tyre. He finished the stage only when Aucouturier gave him one of his spare tyres. Injury due to a fall on the next stage to Grenoble caused him to abandon.

The following year he took five stage wins out of thirteen and overall victory with 31 points. Again he was first up the Ballon d'Alsace but this time he stayed ahead, finishing as Dijon 48 minutes before his nearest competitor. He also won in Grenoble by fifteen minutes and at Nice by 26 minutes. He completed the 4,546 km in 189 hours, 34 minutes at an average 23.98kmh.

On 25 January 1907 he committed suicide by hanging himself on his bike hook after hearing his wife had found a lover while he was away at the Tour. A few weeks later, Henri Desgrange, patron of the Tour, erected a stele in his memory at the top of the Ballon d'Alsace, a summit in Vosges.