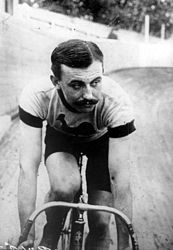 He was born in Plessé, Loire-Atlantique, a part of Brittany, now part of Pays de la Loire. When he was six he moved with his parents to Buenos Aires, Argentina, where he took the nationality. His cycling career started when he won a bike in a lottery at the age of sixteen. As his father wanted him to do a 'real' job, he adapted the nickname Lucien Breton for races, to deceive his father. Later he changed it to Petit-Breton, because there already was another cyclist called Lucien Breton.