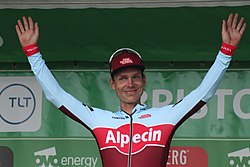 Tony Hans-Joachim Martin (born 23 April 1985) is a German professional road bicycle racer, who currently rides for UCI WorldTeam Team Jumbo–Visma. Martin is known as a time trial specialist, and is a four-time world champion in the discipline, having won the title in 2011, 2012, 2013 and 2016. He also won a silver medal at the 2012 Summer Olympics in London, finishing runner-up to Bradley Wiggins in the event.